COVID-19 and the Danger of Exponential Growth 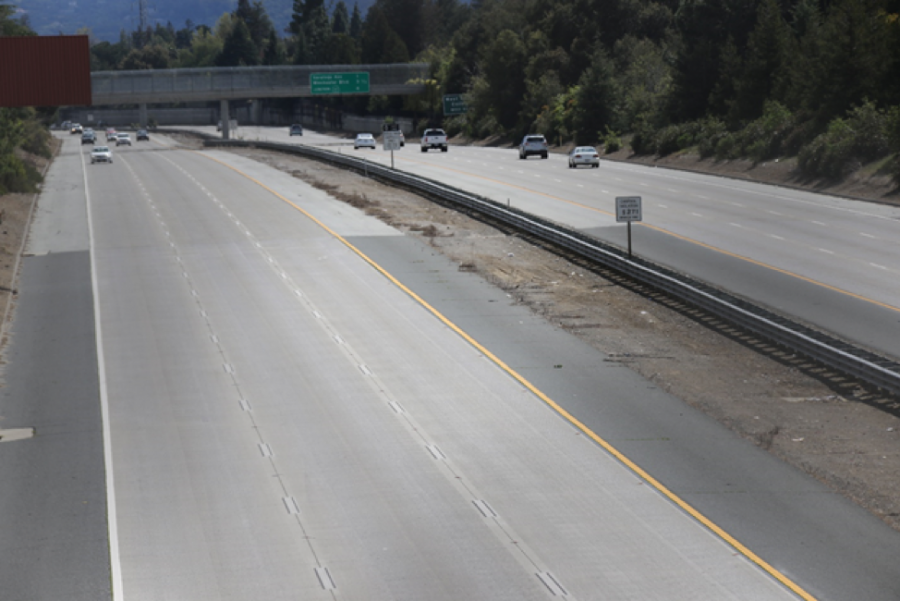 The normally congested freeways of the Bay Area.

On March 6, 2020, Stanford University announced that all classes would be conducted online for the remainder of winter quarter when one faculty member was among 20 confirmed cases of COVID-19 virus in Santa Clara County. On March 17, 2020, Santa Clara County, with 175 confirmed COVID-19 cases, ordered an unprecedented “shelter-in-place” for all residents, together with six other Bay Area counties.

With a rapid rise in confirmed cases, Italy, Spain, and France entered nationwide lock-down in order to slow down the spread of the virus. This caused widespread shortages of personal goods, hygiene products, and groceries for daily lives. Both the governments and civilians were, and still are, caught unprepared.

The seven to 14 day incubation period of COVID-19 makes it difficult for people and government officials to predict the spread of the disease. The current confirmed case count only represents the number of people who have developed severe symptoms and does not count all of the people who may be carrying and transmitting the virus during the initial asymptomatic stage. Any action taken will have a delayed effect on the case count. By that time, the number would have grown exponentially.

The graph below shows the confirmed COVID-19 case counts in selected countries after 100 confirmed cases based on data published by Johns Hopkins University. Most of the countries that did not take aggressive actions containing COVID-19 have case counts growing at a rate of doubling in less than three days. Even after Chinese and South Korean governments took aggressive actions, this exponential growth curve still continued for more than seven days. 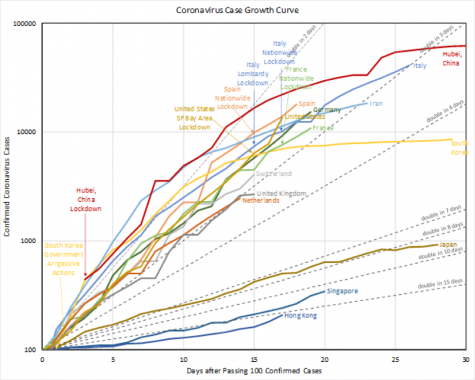 Most of the countries that did not take aggressive actions to contain COVID-19 have case counts growing at a rate of doubling in less than three days. Even after Chinese and South Korean governments took aggressive actions, this exponential growth curve still continued for more than seven days before the curve started to flatten out.

At the onset of the outbreak, the Chinese government enforced a strict lock-down in Hubei Province and many other regions in the country. According to an article, the outbreak is finally under control after two months. South Korea took a different approach. Instead of massive lock-down, the government only implemented lock-down in the most concentrated region. On the other hand, the government quickly ramped up virus testing capacity to massively screen the population for infected people. According to a report, the infected people were isolated and treated early on to prevent virus spread and reduce death rate. Because the South Korean government acted quickly, the case count has saturated to a level one order of magnitude lower than that in China.

It is interesting to note that Japan, Singapore, and Hong Kong have relatively mild case growth rate where they double in eight to 15 days despite the close proximity that these countries/regions have to the epicenter, China. This is probably because the governments and citizens in Singapore and Hong Kong have learned hard lessons from the SARS (Severe Acute Respiratory Syndrome) outbreak in 2003. When the COVID-19 outbreak erupted in China, both Hong Kong and Singapore governments immediately put travel restrictions on mainland China. Hong Kong canceled school immediately after the first confirmed case and encouraged social distancing without resorting to a full lock-down. As reported by Forbes magazine, the Singapore government implemented widespread testing to quickly identify and isolate the infected people to prevent the virus spread.

For infectious diseases with high transmission rate, it is important to keep in mind that the power and danger of exponential growth can cause massive outbreaks if actions are not taken quickly. The western world started implementing massive lock-downs at a much later stage. It is concerning that the total number of infected people might be much higher than what we have seen so far due to the exponential growth.