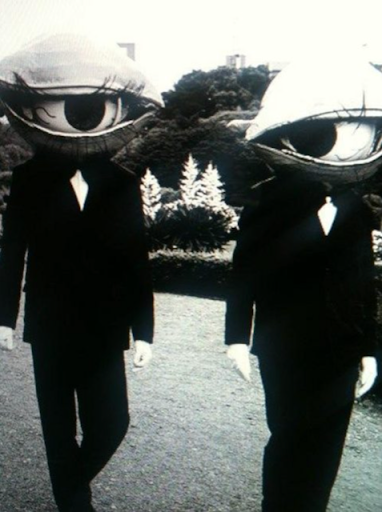 The winner of the Observer Halloween Short Story contest, based on an eerie vintage photograph, has been determined. Literature Club leaders judged the contest and declared”Windows,” written by Syl (no last name given,) as the winner. Syl will receive a gift card to the Zazzle store.

“Windows”
The neighborhood is silent this time of night, this time of year, and the window pane feels cold against his cheek, dead bugs making stamps across his skin. The woman in blue walks slowly down the sidewalk. And each step is meticulously taken tap tap taptap, as the fabric of her pantsuit chafes her legs.

The boy steps away from the window, shaking ever so slightly, not that he would ever admit it if you asked. The room suddenly feels cold and his breath comes in ghostly cigar wisps. The woman is almost out of view now, but not quite and some part of him still feels her gaze on his face. He shudders more visibly now and backs away, he should go downstairs. A loud tapping begins at the door, metallic and sharp. Tap tap taptap. He runs down, his steps keeping time with the knocking.

He crosses the mudroom and reaches for the door handle, glancing at the clock to see if it could be his sister. But he knows it’s not. And suddenly a dreadful sense crashes over him. And everything is keeping beat in a twisted rhythm. The clock and the tapping and the steps and now his heart all tap tap taptaping like a sick dance he can’t escape. The doorknob twists in his hands and his eyes climb slowly in their sockets, afraid to see the face of his visitor. He feels a weight on his shoulder and a voice like a match whispers in his ear. “They say the eyes are a window to the soul.”