Ryan The Lionhearted Leader: An Interview with Mr. Lee 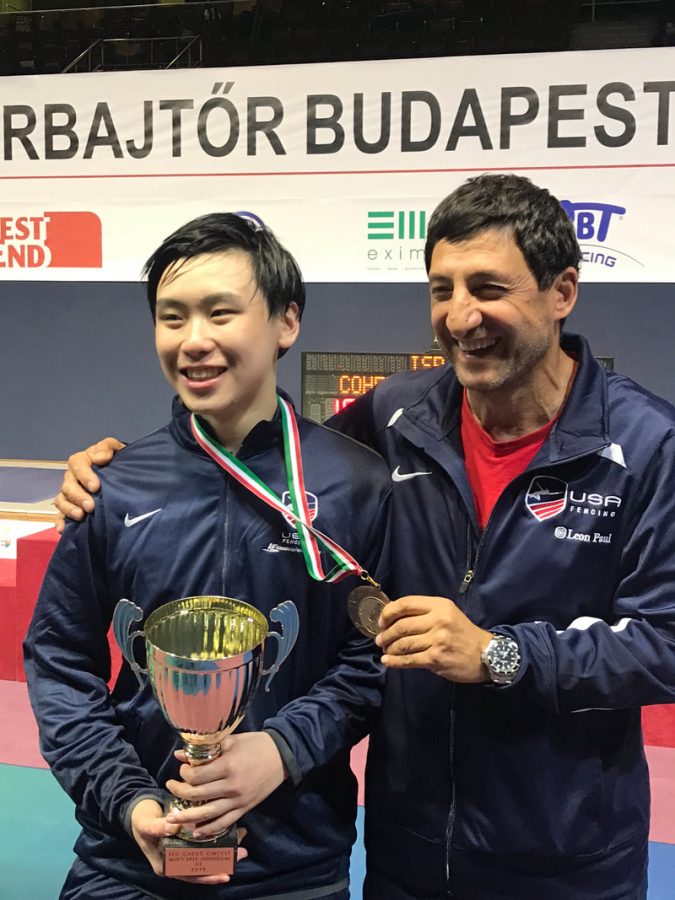 With a sword in one hand and a water bottle in the other, Ryan Lee prepared for battle.

If you’ve been studying at Stanford Online High School for a while, you have likely come across Ryan: he’s been here for a while. One cannot mention Ryan without mentioning his passion for fencing. However, he is not your average fencer: he lands top 5 in the nation for his age category. He has been fencing for over 5 years, and prior to fencing, he used to practice taekwondo. An artist in the ways of combat, Ryan takes his dedication to fencing very seriously. “I practice [fencing] for around 4 to 5 hours a day,” says Ryan, so it makes sense that he is the founder of the Athletics Club at the OHS. At this club, he loves to encourage others to push themselves to the full extent of their capabilities, while also keeping a lighthearted tone at his meetings by discussing the news in the sports world. As an international traveller, Ryan is a role model for his club members since he is able to balance school and athletics successfully. Ryan would like others to know that he genuinely loves his sport and that, according to him, it has helped him learn how “to think clearly in high pressure situations” which is why he encourages others to try out fencing. One piece of advice Ryan has for anyone willing to give fencing a try is to never let your water bottle be stolen.

Outside of sports, it is worthwhile to mention that Ryan is the Vice President of the Comedy Club at Stanford OHS. Ryan pursues comedy in order to form bonds with others while also having a good laugh in the process. In his own words, “my brand of humor … appeals to certain groups.” Ryan recognizes that not everyone finds his humor enjoyable, and that is fine.

Ryan has earned a certain “popularity” at OHS. This is largely due to the Ryan Lee Podcast of which he is the founder. In this podcast series, Ryan is able to bring in a perfect balance of humor, news, and fun. His themes range from interviewing student government members to reviewing Trader Joe’s items. Over a very short period of time, Ryan’s podcast has accumulated over 500 views on just YouTube alone. This success can be linked to the care he puts into every episode and also his motivations for starting the series in the first place: it makes him happy to “interact with the OHS students in a way like that” – he loves to use his podcast as a way to feel closer to the community. “At first I just thought it would be a fun way to… talk about random stuff and interview random people,” says Ryan. But later, he had a new goal in mind: he wanted to serve as a “link between OHSers.” Not only has he made a link, but Ryan has set a trend, and after his debut, 2 more OHS podcasts have come into existence: one on politics and one on economics. “But aren’t podcasts a thing of the past?” you might ask since, after all, it’s just an audio file, and we’ve had audio recordings since the 19th century. While, yes, podcasts are nothing novel at all, it is the content that makes podcasts appealing. Podcasts are also appealing since they don’t overstimulate you with information like videos could potentially do. Podcasts are not only a thing of the past, but they are also a thing of the future. Ryan knows this, and he knows that podcasts have an especially bright future at OHS because “most of [the OHS] interactions are already digital” so “it makes sense that there are going to be more and more of these [podcasts].” However, he warns of a pitfall in the rising podcast popularity: “oversaturati[on].” The bane of too many podcast options is what Ryan thinks could be the doom of the podcast era. He thinks the key to avoiding this is to make sure that his podcasts are “not that long,” most of them ranging around the perfect length of 10 minutes. With today’s fast-paced world, we need our news and entertainment to be succinct in order for us to be able to multitask and get on with our lives, so we are all very fortunate to have so many excellent student-led podcasts at OHS, and I anticipate that the podcast community here will continue to flourish.

While not podcasting, Ryan loves to push his typing speed to the max. His best so far is 111 wpm, and if you beat this speed, Ryan has agreed to crown you as the coolest kid in the school, so that’s an opportunity you do not want to miss out on. On a serious note though, Ryan is hard working, passionate, and athletic, embodying the true spirit of a Stanford Online High School student. “Ryan Lee is hilarious: he makes everyone around him laugh. He also genuinely cares for his friends and classmates. He’s a wonderful part of the student body” says Sophia Barthel, senior at OHS and classmate of Ryan. According to Japji Singh, “I first became friends with Ryan in sophomore year when we were in the same Chemistry class. Thanks to him, my participation in the class decreased by about 50%. Ryan is one of the funniest people I know, and I admire his commitment and success in fencing. His passion for making OHS a more welcoming and open community is evident through his pursuits like the Ryan Lee podcast. More importantly, Ryan is a great friend, whom I know will always have an open ear when I need advice or help.” Let these quotes sink in because there will come a time when Ryan graduates, and OHS will lose a great deal. Without Ryan, the Ryan Lee Podcast will never be the same, and the feeling of that possibility is bittersweet. Certainly, Ryan is very excited for college, but he will also “miss OHS a lot.” With that in mind, Ryan would like to leave you with a great life lesson and that is “you don’t always have to win.” Sometimes, the competition is fierce, sometimes the nerves are strung, but Ryan believes that sometimes one must take a step back in order to take steps forward.